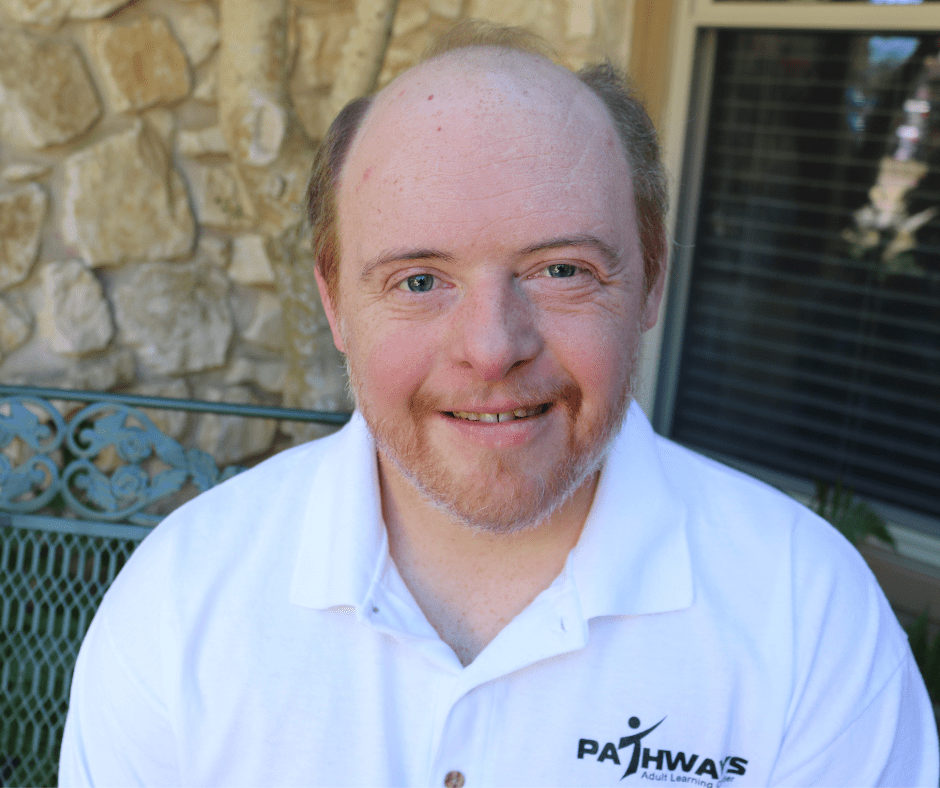 Darla and Patrick, Philip’s parents, share that when Philip was going to graduate from Union High School, they looked for a program where he could retain what he had learned over the years and gain new skills. Skills that would make him independent and help him learn safety, cook, improve his speech, writing, and so much more. They found several programs, but none fit what they were looking for because they were either high functioning or required Philip to sit most of the day.

They began to fervently pray and asked God to open a door for their son that would fit his needs. Then, one day in the mail, they received a survey from Crystal Fulda, the founder of Pathways Adult Learning Center, asking the community if they would be interested in a program that would serve adults with intellectual and developmental disabilities at Kirks church. With the anticipation that this could be the answer to their prayers, they responded to the survey. They then received more information about Pathways and an enrollment form. As soon as Darla got the application with joy, she filled it out.

Philip’s application was the first application received for Pathways. Until this day, his parents call him student #1 since he was the first student enrolled in the program. It all started on June 1, 2009, in classroom B8 in the basement room of the Kirks church with seven students and two part-time teachers.

It has now been 12 years since Philip started Pathways, where he is a full-time student in our program. Every morning he arrives at Pathways ready for the day and says that every day at Pathways is a special day. His mom shares with us that at Pathways, he has improved in his speech, writing, helping around the house, knowing bible stories, knowing his phone number, and knowing the basics of putting his food together.

Pathways has become an answer to many families’ prayers. Philip’s parents say Pathways fits the niche for families like theirs and share that if it weren’t for Pathways, Philip would have regressed in his functional level since his understanding is someone of the age of 5 or 7 years old even though he is 34 years old. Philip needs Pathways because it meets his needs. With his parents working full time, he needs a program to flourish. Philip is an extrovert and requires social interaction with peers that understand him and teachers that care to listen to what he has to say. He is also routine-oriented, and Pathways provides him with a schedule ahead of time to know what to expect. Philip’s parents also share that he considers himself a performer and delights himself in every opportunity to perform for Pathways events and any classes where he can showcase his talents.

Pathways offer students like Philip a social group where they can relate to each other, learn together, improve their health through fitness, and make memories that last a lifetime. Every adult with an intellectual and developmental disability deserves to be a part of something great and not sit on the sidelines. To all of you who make Pathways possible, we want to thank you for the impact you are making in the lives of our students and their families.