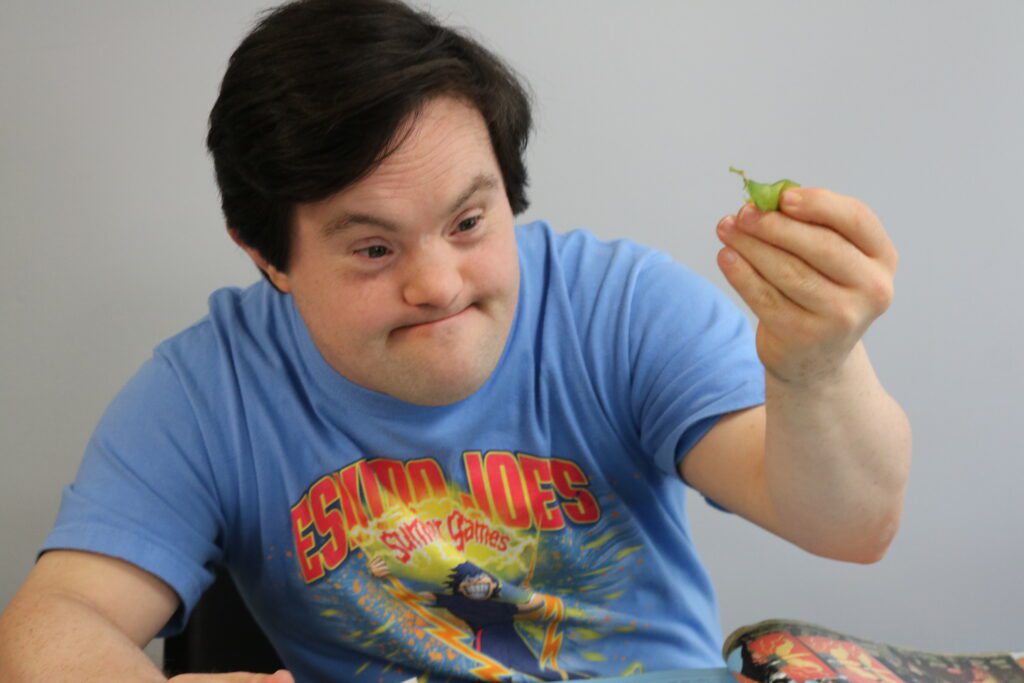 A 2019 Pathways student goal is to try new things. Its easy to get into your daily rhythm and forget there are tons of things to do and try in this world, from interesting foods and new modes of transportation to projects that may seem hard or scary. These last six months students haven’t let fear keep them from reaching their goal of trying new things.

Student Brett tends to be a creature of habit. He likes to keep a very steady schedule and pays close attention to calendar events. His organization skills are amazing. Like his schedule habits, he likes to be consistent with the food he eats and isn’t keen to try new ones. Still, during Friday snack time he tries everything. During Japan week he dove right into Edamame pods with a smile on his face. During South Africa week he tried a variety of fruits from papaya and kiwi to guava and lemons. He tried it all proving that any creature of habit can mix it up.

Historically Madison likes to keep both feet on the ground. Her typical modes of transportation include walking and riding in a car, so when she heard she had the opportunity to ride a motorcycle at the summer carnival she was intrigued but nervous. “I want to give it a try. Of course, I’m nervous but this is a great chance to conquer my fear,” she told her classmates as the carnival approached. When June 22nd arrived, Madison was one of the first ones on a bike and she loved it. “I had so much fun and feel proud of myself!”

Trying new things comes in all forms and sometimes it’s as simple as the difficult task of having confidence in one’s abilities. In preparation for the summer carnival students created individualized pieces of art to display at the event. Patricia really wanted to draw a horse but wasn’t confident that she would draw it herself. Rather than give up and draw something easier, Patricia found pictures on line and practiced drawing them over and over again and the final result was a true masterpiece. “I didn’t think I could do that,” said Patricia, “I’m pretty proud of myself.” Patricia was so excited she grabbed another canvas and started a second piece.

Trying new things can be scary and it comes in so many different forms. What may seem easy for some may be difficult for others. Pathways students are doing a great job showing that trying new things opens you up to a new world of possibilities.